Peek-a-Boo Patterns is having a fantastic Spring Sale! 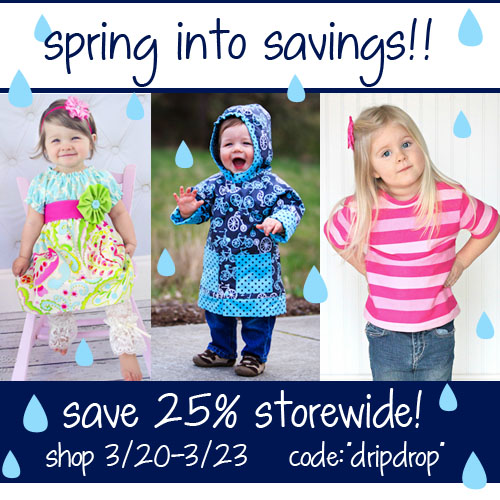 This is a great time to load up on your favourite patterns!

Here are a couple of my faves:

I love these skinny jeans! They would be perfect for spring in fun, bright colours.

And who doesn't love a cute cowl neck! This would be so sweet paired with a pair of skinny jeans! Hurry on over and load up while this great sale is on! You have until this Saturday March 23rd to save.
Posted by Love In Everything at 09:06 0 comments

"Saving the world is hard work"

Last night Rob picked us up from the dance studio and dropped us off at home, before heading back out for another job. He invited Jas and Jude to go along with him. When they returned home, Rob told me the kids had said the sweetest things.

So just to give you a bit of background info, we live on the West Coast of BC and are fortunate to have forest surrounding us. The drive from our home to Rob's job is particularly forested, so clear cutting really stands out. There also were logging trucks along their drive. 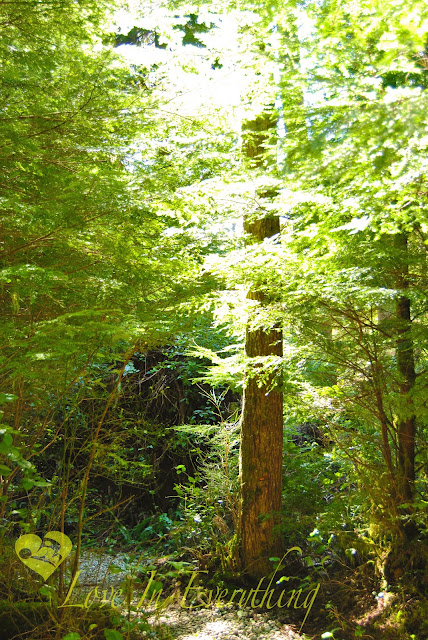 This is a snippet of what the boys were discussing on the drive:

"Daddy, if there are no more trees we wont be able to breathe.
They need to stop taking our trees away. He needs to stop selling our trees and all of our stuff.

We need to all get together and hold hands and talk.

It is hard for us to save the world. We need to get together, share, hold hands and talk." 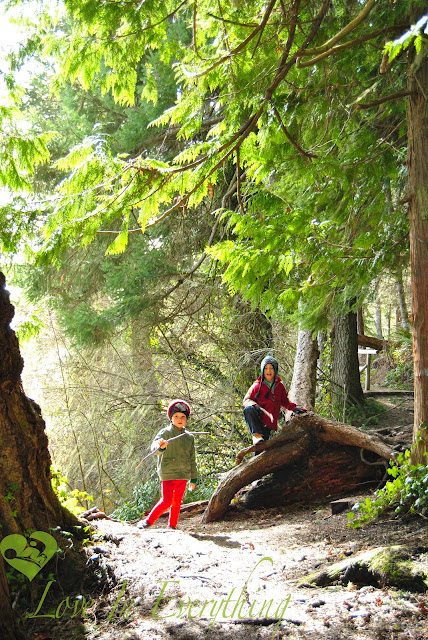 Posted by Love In Everything at 10:44 1 comments

Email ThisBlogThis!Share to TwitterShare to FacebookShare to Pinterest
Links to this post
Labels: caring for the earth, children, saving the planet

I had the pleasure of testing out TrashN2Tees first applique pattern, with my two littles, and we had a blast! I let my boys choose their fabrics from my ever growing scrap pile, as well as place the pieces of their trucks on their shirts. They kept trying to sneak peeks at the paper showing different ways to put the trucks together, but I really wanted them to be creative, and not be influenced in any way.

Before I show you the tees let me share a little info with you about TrashN2Tees. TrashN2Tees, run by Jenelle, has diverted more than 20 tons of clothing from our waste stream and she has created the patterns as a call to action for others to join her in her movement to change the way we consume and create. On the side she is working on the Create Change Movement App, which I am very excited about! It will be an app where you can search for ways to re-use items that are likely on their way to the dump, so rather then throwing out your unwanted trash, you can turn it into something useful, creating less waste! I love it! You can also check out her blog where she is running DIYU: School for Crafting Misfits.

And now onto the Trucks! Here are the two completed versions. Jasper's on the left and Jude on the right. 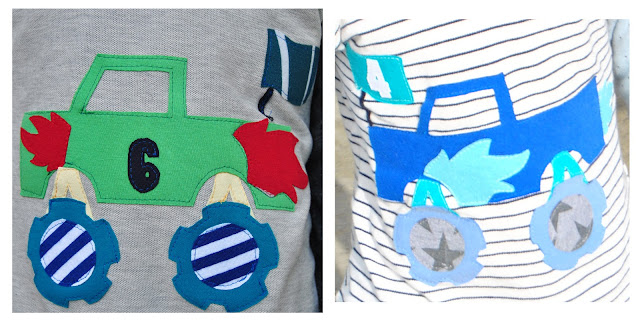 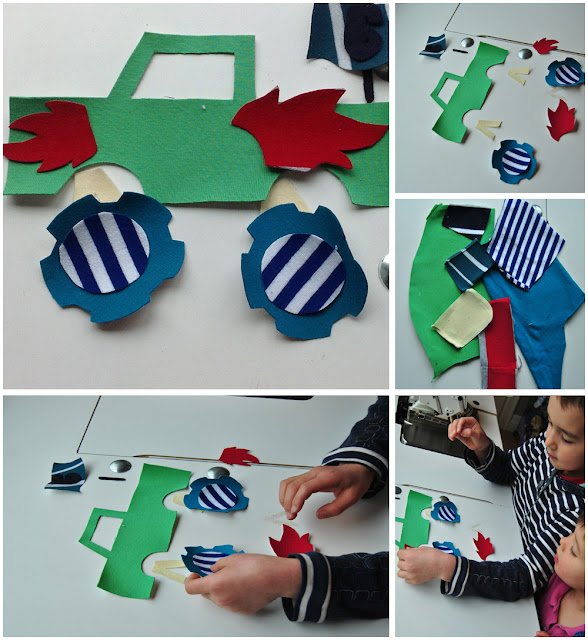 This is Jasper's truck. I was a little leery when he was picking out his fabric choices. He was all about the stripes, and I thought it would be too busy, but it came together perfectly and I love the finished product. I made one suggestion and that was to move the 6 onto the truck because I couldn't see it on the flag. He agreed it would be more visible there, so we moved it in the final sewing. 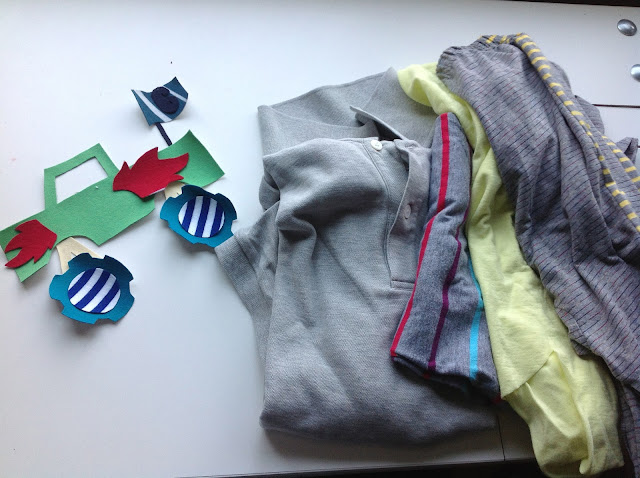 I of course decided to make the tees for them, so I picked out the fabric for their tees, they had no interest in picking their t-shirt fabrics. 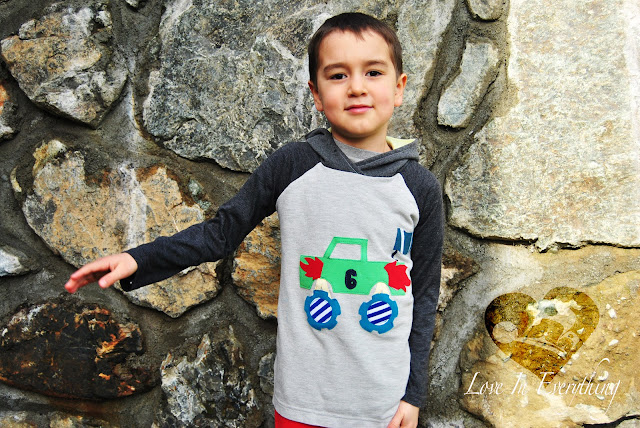 Here is Jasper in his rad truck hoodie! 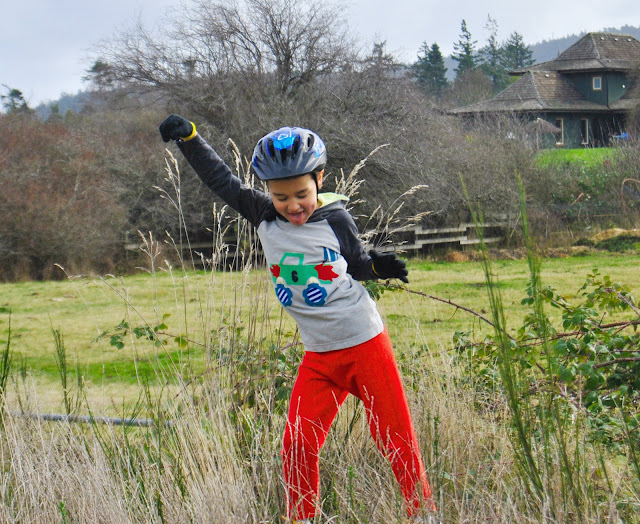 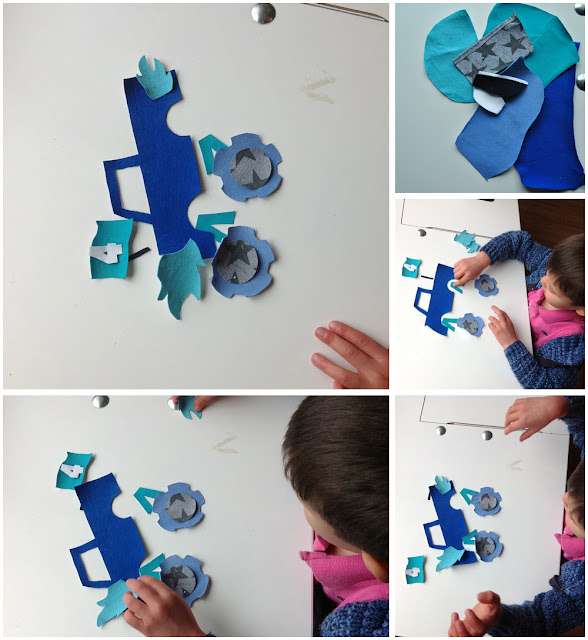 This was Jude's fabric selection and process. Again, I was thinking too much blue, but he also impressed me with his choices, because it came together perfectly. I also made a switch on his because there wasn't room on his shirt for the flame on the front of the truck so we moved it to the wheel. 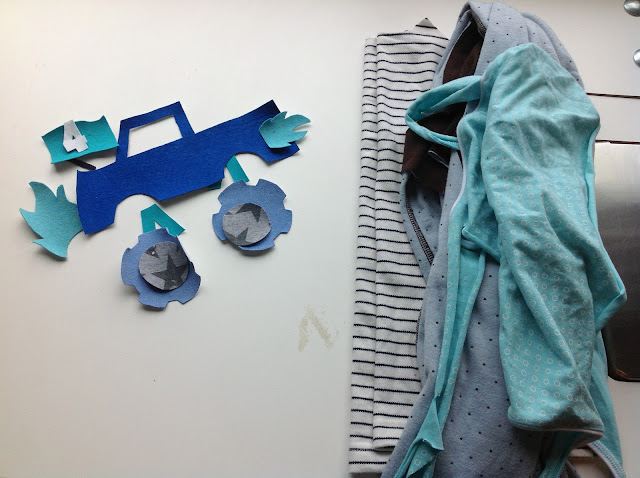 The shirt fabrics. Jude wanted a long sleeve, not a hoodie. He was very specific about his request. 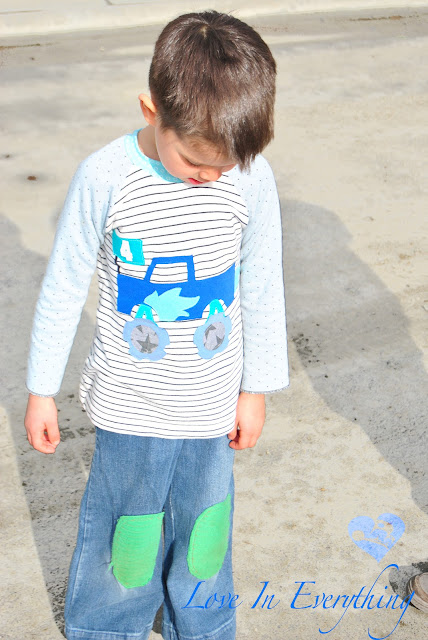 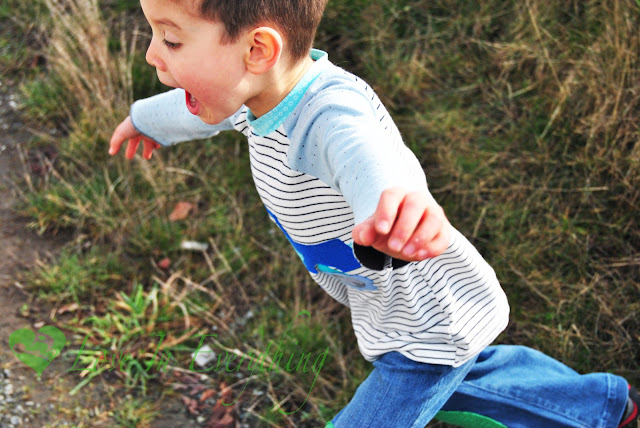 And this is often what happens when I point the camera at Jude! He takes off!

So all in all it was a fun project, and I was so happy to have my boys involved in the creative process. They also love their shirts so much more, because they had a hand in creating them.

I also managed to put a tiny dent in my mountainous scrap pile so that was fantastic too:) 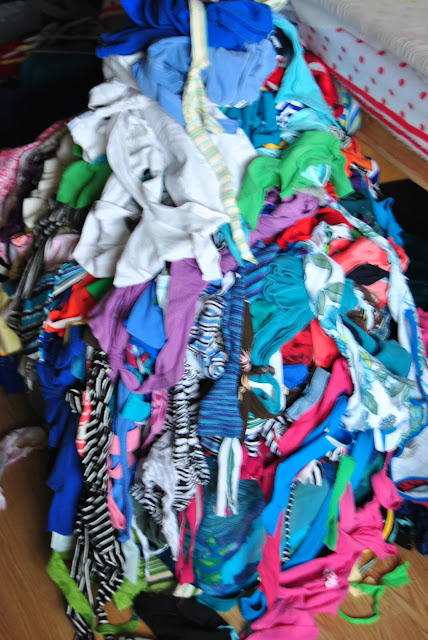 So if you are looking for a fun project you can work on with your kids as well as a way of using up some scraps, head on over to TrashN2Tees and pick up your copy of the appliqué. She will be releasing the pattern today!

Posted by Love In Everything at 08:13 4 comments

Promote Your Page Too